Benefits Fraud: would the taxpayer save money by giving every citizen their due, not a penny more, not a penny less? Actually, it would cost £12.7 billion EXTRA! 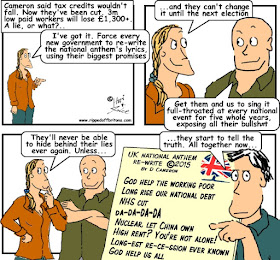 [UPDATE OCT 2015: £13bn in benefits were unclaimed in 2013-14, according to employment minister Priti Patel. Charities say the main reasons are the complexity of the system, as well as pride and shame. The Joseph Rowntree Foundation has studied the low take up of benefits and found that lack of knowledge was often to blame. Even where people were aware that a benefit existed, often they did not know they were eligible - let alone how to claim it. Meanwhile, in communities with a strong work ethic and pride in self-reliance, people are particularly unwilling to claim benefits. And the demonisation of benefits claimants in Parliament and the media means people are too ashamed to claim the help they need - and are perfectly entitled to. A study of free school meals in Scotland, for example, found that when eligibility was briefly extended to all children in a particular age group, take-up also increased among those who had already been eligible for free school meals - because they no longer thought their children would be bullied for receiving school meals.]


Moral outrage is about something that doesn’t affect you personally. If someone pulls the leg off your teddy bear, it’s not moral outrage you are feeling – just rage. (No, really, I forgave you years ago. You know who you are!)

Moral outrage is all about the principal. And is magnified more by how close the offender is to you than by the magnitude of the offence.

When Ed Miliband, the leader of the UK Labour Party, wanted to give his outraged morals an airing in a speech earlier this month, he picked on two sets of bogeymen.

1)      A man he had met who “hadn’t been able to work since he was injured doing his job. It was a real injury, and he was obviously a good man who cared for his children. But I was convinced that there were other jobs he could do.”

2)      The executives of “Southern Cross care homes - where millions were plundered over the years leaving the business vulnerable, the elderly people in their care at risk and their families feeling betrayed.”

Miliband went on to say “We must be once again the party of the grafters” rather than, as before, of grifters. And continued “..there is a link between the man on incapacity benefit and those executives at Southern Cross. What is that link? That these are people who are just not taking responsibility - and the rest of us are left picking up the pieces.”

How did a “good man who cared for his children”, claiming £71.10 a week in incapacity benefit while looking pretty fit to Miliband, find himself in the whiffy company of unashamed slash-and-burn executives who pocketed an estimated £500million at the expense of pensioners?

The sad truth is the thought of some individual scamming us taxpayers out of £71.10 per week in incapacity benefit while actually being capable of flipping hamburgers for minimum wage is enough to blow all our other troubles away. We will soon forget about Southern Cross, but the bitterness for benefits cheats will stay with us.

No matter that we can’t afford a proper armed forces or a health service, we need to hand our schools to private companies, have to work until we are older and get less pension. Misfortunes caused by avaricious bankers who were let off the leash, self-serving politicians who got rid of the leash, and incompetent regulators who wouldn’t know how to use that tricky-dicky catch on the leash even if they had a leash and the inclination to use it.

What we need to do, we are told by politicians to the left and to the right, is tighten up on the benefits system. Make sure that everyone gets just what they are entitled to, not a penny more and not a penny less.

But would tightening up save us any money? The figures show that it would actually cost us billions.
In these straitened times, saving money is what it’s all about. After all, did we scrap HMS Ark Royal because we didn’t need it? If so, why did we have it?  By taking out the Ark Royal, bankers did something last achieved by a German U-Boat in 1941. 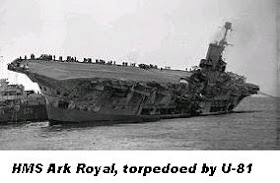 On the other hand, the amount that was simply not claimed at all is many times this.

The fact is, if everyone got what they were entitled to, nothing more and nothing less, then Department of Works and Pensions figures show it would all cost us £billions MORE!

The last thing governments want is to be clear about the uncomfortable truths. So, here are the meanings of key bits of official-ese you will need for the next bit:

And here are the totals in folding money:


“Taking all six income-related benefits together, [Income Support, Pension Credit, Housing Benefit, Council Tax Benefit, Jobseeker’s Allowance (Income-Based) and Employment and Support Allowance (Income-Related)] there was between £6,930 million and £12,700 million left unclaimed in 2008-09; this compared to £38,110 million that was claimed and represents take-up by expenditure of between about 75 per cent and 85 per cent.”
Department of Works and Pensions, research published in June 2010. 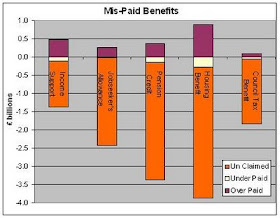 Fraud in 2009/10 cost £1billion, which was less than 1% of total benefits payments. The reality is that if the government ran a campaign to ensure everyone took only what was coming to them, it would cost up to an extra £12.7 billion. How likely are they to do that at a time like this?

Politicians are overwhelmingly from the comfortable middle classes. Brought up traditionally, they will have all watched all those optimistic Hollywood musicals repeated over the years at Christmas. Few were repeated more often during the childhoods of this current generation of politicians than this song from “The King and I”.

Whenever I feel afraid
I hold my head erect
And whistle a happy tune
So no one will suspect
I'm afraid.

While shivering in my shoes
I strike a careless pose
And whistle a happy tune
And no one ever knows
I'm afraid.

The result of this deception
Is very strange to tell
For when I fool the people
I fear I fool myself as well!

Singing the song of benefits fraud finds plenty joining in from the broadcast, online, and print media. Politicians, always afraid of being found out, are happy to take cover and comfort wherever they can find it.

Benefits fraud, certainly a problem in itself, has proved successful in diverting Ripped-Off Britons from the much bigger problems in their lives. Politicians hope that by making ordinary Britons suspicious of and annoyed with their neighbours, they will forget they are getting ripped-off far far more by utility companies, banks, insurers, the taxman, and the government itself. Bigger problems that the politicians are too afraid, or too complicit in, to deal with.