Graphs at a glance: Are the improving unemployment figures all they seem to be? Dig a little deeper into the stats and see what you will find. 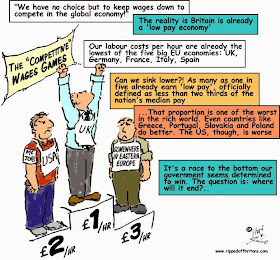 Wages in the UK continue to fall in real terms (rising slower than inflation) in spite of an improving labour market.

So are these falling unemployment figures really all that encouraging?


Office of National Statistics (ONS) Labour Market Statistics count "anybody who carries out at least one hour’s paid work in a week" as "being employed". Which means the self-employed and those on zero-hour contracts need only get one hour's work a week to be taken out of the unemployment statistics. However, put that gloomy thought to one side and the year between the summers of 2013 and 2014 saw a sharp fall in the unemployment rate.


Statistics try to use data to shine a light on what is actually happening. However, wherever there is light there are shadows. Unemployment rates in certain occupations are double the national figure. The Office of National Statistics helpfully provides a breakdown of unemployment rates by 'occupation of last job' that illustrates this. 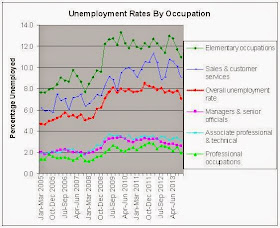 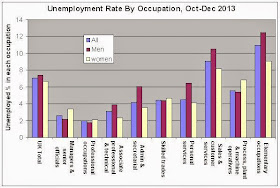 Should people in Elementary and Manufacturing occupations be getting on their bikes and moving into high demand trades? According to crumpled Tory sage/scallywag Ken Clarke, the UK recovery is fragile. Clarke, in an interview with the Observer, said of the recovery:

The central problem threatening the UK recovery is it is not balanced. Most clearly shown by the grand imbalances in unemployment rates by occupational sector.

And so we end this post with what may be considered by some a pretentious quote from the poet John Donne. A quote that will probably go over the heads of those who follow a 'devil take the hindmost' approach:

"No man is an island, entire of itself; every man is a piece of the continent, a part of the main. If a clod be washed away by the sea, Europe is the less, as well as if a promontory were, as well as if a manor of thy friend's or of thine own were: any man's death diminishes me, because I am involved in mankind, and therefore never send to know for whom the bells tolls; it tolls for thee."

High unemployment in the laborious sectors does not only toll doom for the under and unemployed, but also for the British economy as a whole. 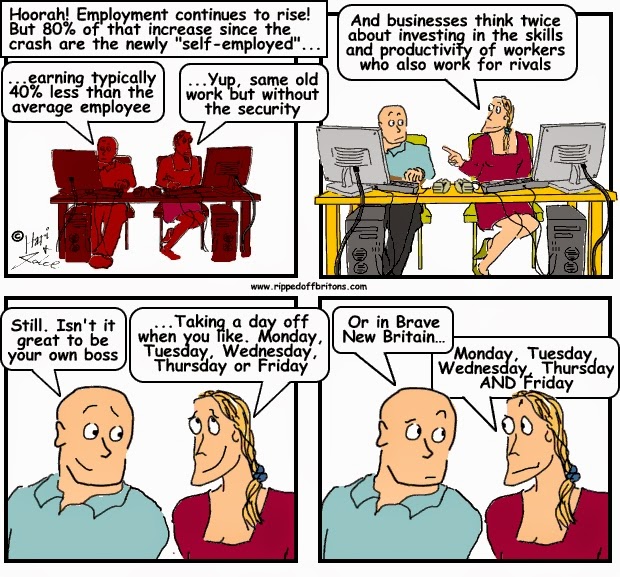