No joke. The promised upturn in house building has now run into a shortage of building materials!

Fee and KJ wonder if anyone is surprised... 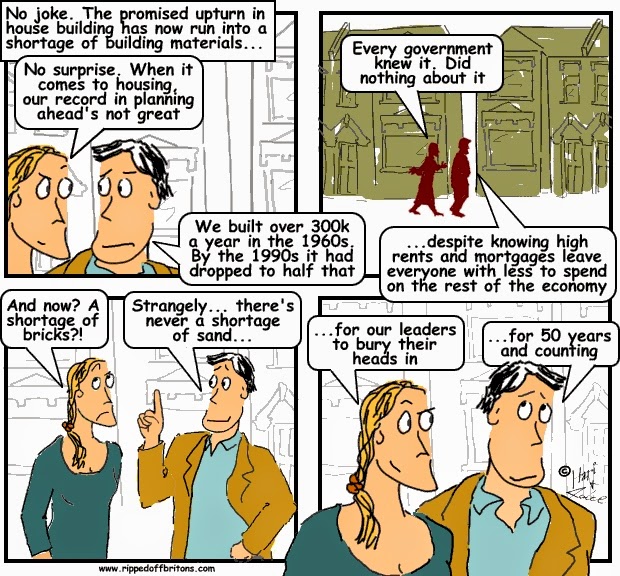 
Activity in the construction sector as a whole continued to rise quickly, albeit at a slightly slower pace than in June, according the Markit/CIPS UK Construction PMI report. As builders continued their recovery after being badly hit by the recession, there were fresh concerns over the supply of both materials and labour keeping up with demand. Following reports of brick shortages earlier in the year, the survey highlighted pressures on suppliers to keep up with demand as they rush to boost capacity and reopen plants mothballed in the recession. "A pressing concern for construction companies is the availability of materials and suitably skilled labour to support the recent growth streak," said Tim Moore, senior economist at Markit. "Cuts to supplier capacity have ushered in the worst period of input delivery delays since the survey began in 1997, while this summer has also been notable for construction firms reporting near-record increases in rates commanded for subcontracted work."

No rise in Housing Benefit claimants for 30yrs but the bill quadrupled. Why? Declining new house builds, rising rents

Graphs at a glance: Government's "Help To Buy" won't help those struggling to buy a house. But it will help people with rich parents

Graphs at a glance: See how the government caps benefits for the poor but subsidises "affordable housing" for people on £80k

Liebrary: "If it isn't hurting, it isn't working". How Austerity works for the few by hurting the many