Graphs at a glance: East Coast Mainline. Why is the government so quiet about one of its greatest success stories? 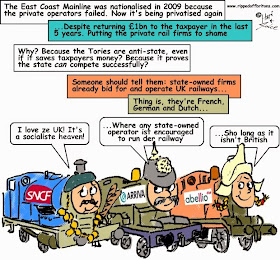 You would have thought a company delivering record levels of cash to the taxpayer would have something to boast about. Surely its bosses would want to crow about how they turned around a failing franchise that had been abandoned by the previous two franchisees. You’d think they would use this laudable fact to justify a round of plump bonuses and a topping payrise.

This secretive organisation is the East Coast Mainline Company Ltd (East Coast). East Coast is the government owned Train Operation Company (TOC) that took over the nationalised East Coast Mainline after that franchise was abandoned by the private sector, first by GNER (2007) and then by National Express (2009). It is a company celebrated in the Guardian and the Daily Mail for returning a whopping £1billion to the taxpayer since the franchise was nationalised in 2009. And yet its bashful bosses box on, according to their annual report, on their modest Civil Servant salaries (East Coast CEO earned £224.8k in 2013. Peanuts compared to CEOs of similar sized companies (FTSE250 CEO average pay = £1.3 million) and with no bonuses and no share options .


While the newspapers tooted the whistle for East Coast’s success in the first week of August 2014, the only press releases made by East Coast itself that week were:
(10th Aug) Donna Tart (TV personality) launching“I love trains” week.
(1st Aug) Launch of its “bold new” website. 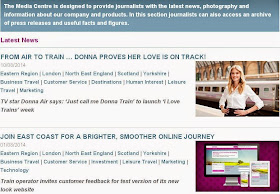 So why does East Coast cover its triumphs under a layer of soot and cinders worthy of Thomas the Tank Engine on wet straw? The smoke surrounding this mystery clears when you consider East Coast is a subsidiary of Directly Operated Railways, which is itself a wholly owned subsidiary of the Department for Transport. 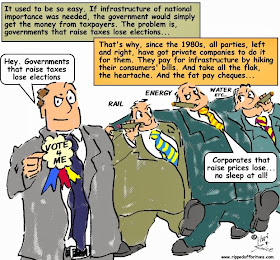 The success of East Coast is nothing less than a shower of hot coals on the heads of a succession of Labour and Tory Transport ministers since privatisation started in 1993. It is an accidental head to head collision between public and private sectors that the public sector embarrassingly won.
Apart from the £1billion East Coast paid to the taxpayer, other statistics from the Office of Rail Regulation show the success of this nationalised company:
1)  Percentage of trains cancelled or significantly late improved: 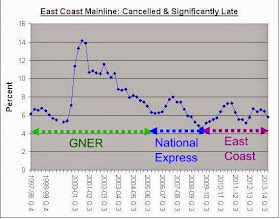 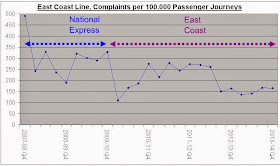 From the 2014 National Passenger Survey, comparing all Train Operating Companies for percentage of passengers who were "satisfied or better", East Coast performed as follows: 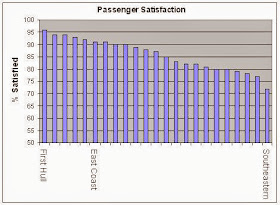 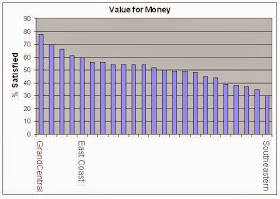 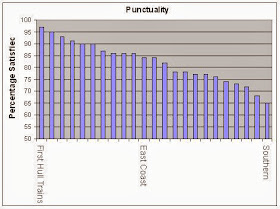 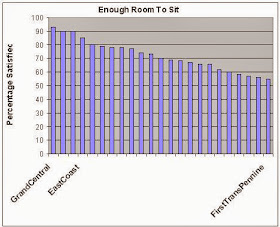 This whole thing is a terrible embarrassment for both Labour and Tory. But particularly for the Tories, who are running the competition to re-privatise East Coast, as well as renewing several other franchises in the 2015 election year. 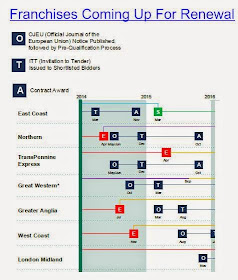 Even if their political masters won't allow East Coast to proclaim their success, the rest of us ripped-off Britons should. Spread the word (by tweeting this post), and sing the song (lyrics provided):